Working with my family archive, which is now kept in the Russian National Library in Moscow I found a document from which I learnt about Baron Theobal Metzger von Weibnom and my Metzger line.

This is a Power of Authority, which my grand-grand-grand-mother, widow of lutheran priest Amalia Schumacher (nee Metzger) made in 1840. In this document she grants to the lawyer the right to represent her in the court and in all legal actions connected with the inheritance of Theobal Metzger. Amalia lived in a small city of Kaidanai, now in Lithuania. This area was joined to Russian Impire only in 1812. Here is the first, most important part of the document (in my translation from Russian).

“I, undersigned, have been informed that the deceased ancestor of mine, General-Leutenent of the Royal Netherlands Army and Statthalter of the city of Breda, who had died in 1691 in the city of Hague, Theobald Metzger von Weibnom had made his last Will in favour of his relatives living in other differrent countries and that the property left after his death is now in the possession of the Royal Netherlands Treasury, agaist which some of the relatives, whose level of kinship is however uknown to me, have brought legal actions.</i>
Considering myself along with my 2 brothers and with fourth sister and with the children of the deceased third brother a close relative of the deceased Theobald Metzger von Weibnom and consequently having at least the same rights as the mentioned above plaintiffs,

I hereby grant the unlimitted authority to Professor Gustav Lerhou to represent my rights for the said inheritance everywhere, in the court and outside the court....”

So far the Power of Authority was registred by the Russian Imperial Court it is still a kind of a valid legal document. I don’t know yet where and when Amalia Metzger was born, who were her parents and brothers, and who of the Thebald’s brothers was her (and mine!) direct ancestor. These all to be found out in the future. It is only clear that Amalia’s father descended from the paternal line from one of the brothers of Theobald.

Here is the copy of the final part of the document with the signitures. Amalia Schumacher wrote her name (Priest widow Amalia Schumacher nee von Metzger) and signed in German, and I think she did not speak Russian at all. 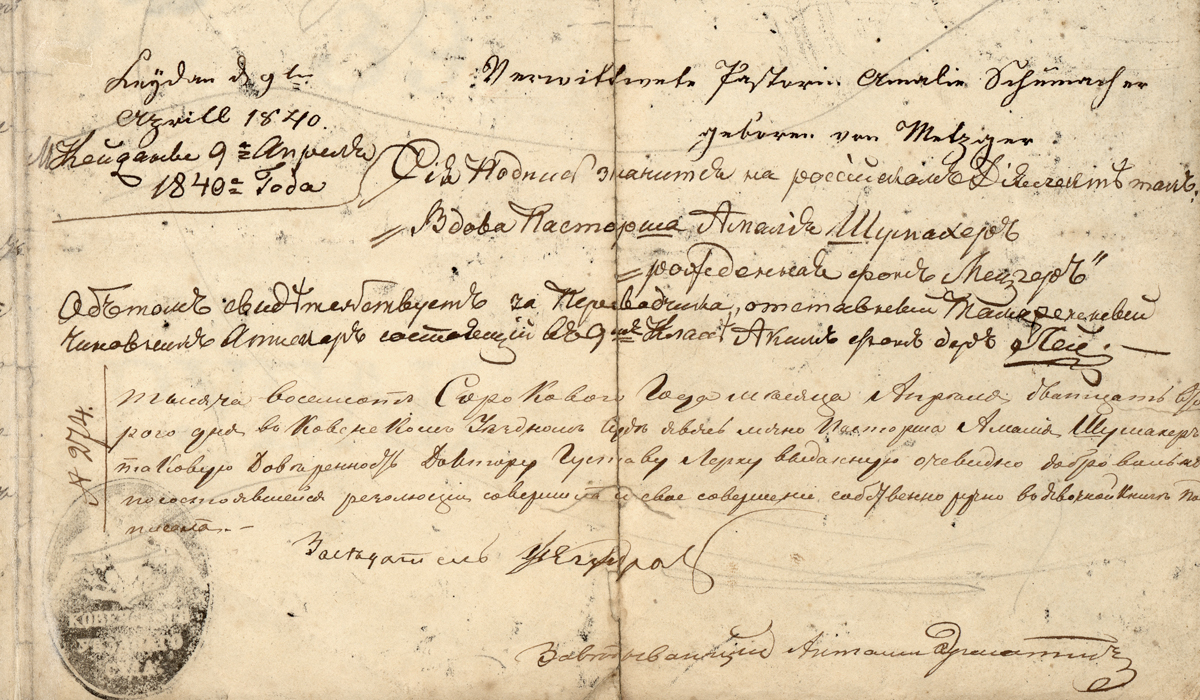